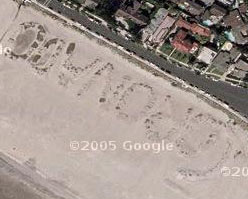 So I was messing around with the amazingly new Google Maps and it’s satellite imagery tool today when I discovered something quite interesting. I was checking out various local spots I’ve been to and/or frequent, and as I made my way over to Coronado Island to check out the Hotel Del Coronado, something caught my eye. In the beach just to the north of the hotel there appeared to be a large-scale grafiti project in the sand.

Now, beach grafiti is nothing new, but this was a little different. I asked myself, “What are the chances of someone’s beach grafiti being present at the very moment that this satellite image was snapped?” I continued, “Damn, that’s some BIG fucking sand grafiti!” Then it dawned on me. This is not some random act of violence against our beloved San Diego beach sand… this was a master-planned “HELLO WORLD” from the people of Coronado! Though it’s upside down in the satellite photo, the text in the sand reads “CORONADO.”

Check it out for youself: Google Map of Coronado’s Sand Grafiti

I’ve always thought the sand dunes there were neat, but assumed they were a natural feature of the beach. There’s no possible way to know they actually make up letters when you’re on the ground, because they are HUGE. Bigger than the Hotel Del itself, which is a beast of a hotel. And as a San Diego native with a pretty good knowledge of local trivia, I had never heard of this before.