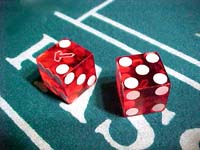 The past couple years, I’ve really grown to love the game of craps. For me, it always requires a trip to Vegas, because by law, in California all table games require cards to be legal. No dice allowed unless cards are also played. Despite the explosion of Indian Casinos in San Diego, I never quite enjoyed myself at them because of the lack of craps.

Recently, however, I saw an ad for Barona Casino advertizing craps. My prayers had been answered! I could finaly enjoy myself in a casino without a trip to Vegas. Wrong. As it turns out, Barona got inventive and created a game of craps using cards instead of dice. It’s the same craps table we’re all used to, with one glaringly obvious difference. I went right up to the table, got some chips, and layed down my pass line bet. Waited around for the dice to come flying down the table, but instead heard the stickman call out a number. “What the hell,” I said to myself, “I didn’t see any dice.” Confused, I watched as people placed more bets, followed by the stickman calling out another number. It took me a few “rolls” to realize what was really going on.

Card craps, as it’s called, involves two shoes of cards containing only Aces and 2 through 6, the equivalent of the values on dice. For each “roll” the boxman pulls one card out of each shoe, resulting in the point value for that “roll.”

After some initial hesitation and desire to take my chips and run, I thought I’d give it a try for a few “rolls.” Turns out I didn’t like it ONE BIT. There are a couple reasons:

One, there’s no dice! Part of the fun of craps is watching those things fly down the table and bounce around till they land on a number. There’s more suspense in that, I feel, and that’s why I love craps.

A second reason why I don’t like card craps, related to the first, is that a lot of the social element of the game is removed when the dice are removed. There’s no longer incentive to chit chat with your neighbor, or to cheer for the shooter when he hits the point. You also lose out on the chance for a pretty lady to blow on your dice before rolling. The whole draw of craps for me is the social aspect. It’s what sets it apart from any game in the casino.

Third, and probably most important, is matematical probability. I’m a fan of games where prior results have no effect on subsequent ones. A clean slate every turn. It’s like flipping a coin: whether it came up heads or tails on the first flip has no bearing on whether or not it will be heads or tails on the next flip. The same is true for dice. With a deck of cards, however, this is not true. For example, if a 6 and a 3 are pulled on the first “roll,” that’s one less 6 and 3 in the deck, so it is less likely that a 6 or 3 will come up on subsequent “rolls.” I know this is wierd, but I felt cheated by this, as my clean slate for every roll was no longer there.

Additionally, this is a completely new probability structure from the original craps structure that has taken me years to get used to. You always know the probability of dice: 7 is most likely, followed by 6 & 8, then 5 & 9, etc. The way that card probability works injects a sense of unease that makes me feel uncomfortable. On the other hand, blackjack players have been known to use card probability to their advantage by “card counting.” I wonder if the same could be done here? It seems like it would be much harder in this situation, because there are less card values to work with (only aces and 2-6). Any card counters out there like to comment?

Fourth, there were some general annoyances. One that drove me crazy was, WHY DOES THE STICKMAN HAVE A STICK? There are no dice to retreive or push around, so it’s completely pointless for the stickman to have a stick. He didn’t do anything but wave it around like a magic wand, and it was obnoxious. Finally, the dealers didn’t know what they were doing! They’d forget to pay out bets and wouldn’t move my bets where I asked them to. Maybe it was because this is a new game and they were still learning, or maybe I’m just spoiled by the professionalism of Vegas, but it was the final straw that broke the camel’s back, and I was out of there.

I guess it’s back to Vegas for me. No complaints there, mind you, but it would be nice if I could play a round of craps in my own back yard every now and then.

[UPDATE]
I did some research on the no-dice laws and found out that there was an initiative on last years ballot to “Expand Tribal Gaming” and that included the exclusive usage of dice in table games! Unfortunately the initiative was rejected by the voters, so don’t expect to see classic craps in Indian Casinos any time soon.