My 3G iPod got stuck with the Apple logo on its screen. The way to fix this is to put the iPod into Disk Mode and restore it from there. Here is how:

iPod does not appear in iTunes.

I have an old 3G iPod, and all of a sudden it would not show up in iTunes when connected to my computer via Firewire or USB. It did show up in Finder. After some research, the only way I found to fix this is to format it using Apple’s Disk Utility. WARNING: Doing this will wipe everything off your iPod. You won’t be able to recover the files off your iPod, but at least you’ll be able to use it with iTunes again.

Your iPod will now be re-formatted, and you should be able to plug it into iTunes and Restore the updated iPod software.

UPDATE: For PCs, you may be able to do something similar with Windows’ Disk Manager. I haven’t tried though, so I can’t verify, but I bet it would work on Windows too.

Max OS X Leopard – Disappointed (but not how you think)

So today is the release of Apple’s next generation version of OS X: Leopard. I had planned on purchasing an iMac a couple months ago, but decided to delay my purchase until the release of Leopard. So I go down to the Apple store (which was PACKED) and proceeded to purchase a shiny new iMac. Excited to try out Leopard, I rip it out of the box and turn it on. And to my disappointment, it boots into Tiger. WTF!? I delayed buying a new iMac for Leopard and I get… TIGER?!!? Turns out Leopard isn’t pre-installed on my iMac. Apple simply threw a Leopard DVD into the box expecting me to sit through a manual upgrade. At the end of the day I don’t really care, but here I am ranting on my blog (from my Windows machine) instead of playing with my brand new Leopard-powered iMac. Ugh!

I always thought that Macs were supposed to just work! What’s with all this manual tinkering and upgrading and waiting and slowly-moving progress bar watching? For a minute there I thought I had bought a new PC running Windows… Shame on you Apple.

San Diego is not FEMA’s anti-Katrina.

The media is already salivating at the prospect of inserting FEMA’s phallus into their mouth and christening the 2007 San Diego Wildfires as the “anti-Katrina.” Granted, San Diego has handled their disaster much better than New Orleans, but believe me, it has absolutely nothing to do with FEMA. At this point, all the feds have done is drop off some cots and some politicians (Hunter, Bilbray, Issa) to take credit for how well things have gone. Their press conference on Tuesday night was a full on circle-jerk of congratulatory praise between the three, and it made me sick.

I’ve been watching this go down 24/7 since the first day, and the first 2 days were handled well by the Local (and some State) officials. Shit was already in place before Ahnold even came down here. Within a few hours, Qualcomm was set up and operating, contingency plans were put in motion, and evacuation orders were being sent out in a very organized and cautious manner. I didn’t vote for Jerry Sanders, but he has done a good job. It made me proud of my city.

FEMA deserves zero credit here. What they have brought to the table is only going into effect as of today (Wednesday, 4 days after the fires started). The threat has pretty much passed as far as the heavily populated areas in San Diego go. Most people have already gone back to their homes (if they’re still standing). Things seem to be getting back to normal and FEMA is just now getting their wheels in motion. About 4 days late if you ask me. San Diego is not FEMA’s anti-Katrina.

Where FEMA will come into play is how they handle the aftermath and the displaced people who have lost their homes. Lets see if Skeletor Chertoff and FEMA can step up to the plate.

The handling of both the San Diego Wildfire and Katrina disasters have had extremely different outcomes. The political shit-throwing has already begun as to why San Diego has handled their disaster better than New Orleans. While San Diegans have experienced organization, support, and supplies, we all know how New Orleans fared. So why has San Diego fared better? Most arguments that I’ve seen come down to race and/or income levels. While it is true that Katrina mostly affected less well-off minorities and the San Diego Wildfires mostly affected white affluent rich dudes, that is not why the response to the two disasters are different. Here is why…

So why did San Diego fare better than New Orleans? It’s not because of race or income level. It’s because San Diego had transportation, electricity, communication, and practice. New Orleans had none of these.

Is it just me, or does the Harris Fire look a bit like a shark attacking the city? 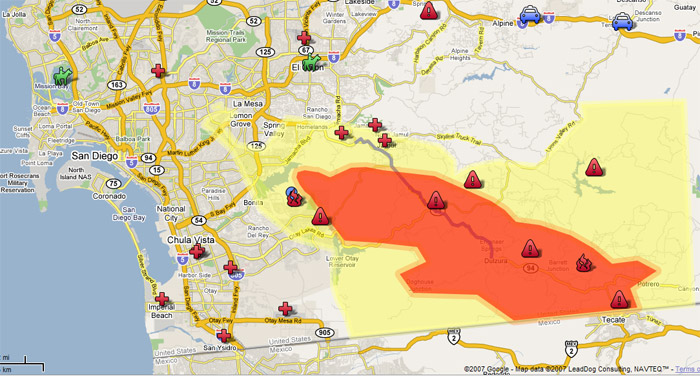